Science advice in multilateral organisations and in infrastructures planning 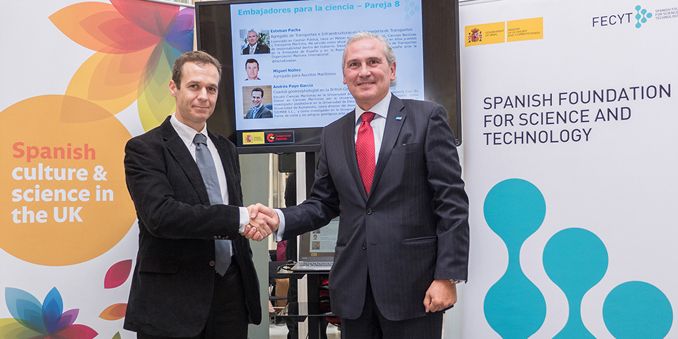 One of these groups was composes by the Transport and Infrastructure Attaché Dr Esteban Pacha, the Maritime Affairs Attaché Dr Miguel Núñez, both from the Spanish embassy in London; and the researcher from the British Geological Survey (BGS) Dr Andrés Payo.

Their first experience took place on 9th October 2017 when Esteban Pacha visited the Oxford Environmental Change Institute because of the celebration of the Oxford Water Network Seminar, where Andrés Payo presented his research about simulation of digital coast models. During this visit, Esteban met with the Director Prof Jim Hall to disucss about some research and infrastructure projects. He also met with Dr Matthew Ives, researcher in the University of Oxford who studies the first national model developed to analyse strategies of both investment and planning of long-term infraestructures.

Between 9-13th October the International Maritime Organisation (IMO) hosted the 39th Consultative Meeting about the Convention on the Prevention of Marine Pollution by Dumping of Wastes and Other Matter of London Convention 1972. Also, the 12th meeting of the London Protocol 1996 about the protection of marine environment from human activity was celebrated. Within this context, Andrés Payo attended on 10-11th October as a guest of the Spanish delegation. He was guided through the different sessions and debates by the Spanish representative Miguel Núñez. During both days, Andrés attended debates in a wide range of topics such as marine geoengineering, microplastic and other waste pollution, etc. He also witnessed the follow-up of the Barcelona Convention about the protection of Mediterranean Sea and how different countries were encourage to ratify the London Convention.

On the 16th November, Esteban Pacha visited Andrés in his workplace: the BGS headquarters in Nottingham. Esteban was received by Dr John Ludden, BGS Executive Director, and was guided through the facilities by both Dr Helen Reeves, Science Director for Engineering Geology, and Andrés. Esteban examined the geological core sample collection and the 3D Geovisionary software. In the afternoon, he received seminars about different transport and infrastructure projects, and was part of a videoconference with Amigos de la Ciencia de Algeciras y la Fundación Campus Tecnologico de Algeciras, which Andrés closely collaborates with in science outreach.

Lastly, Esteban visited the BGS facilities in Edinburgh on 17th November. Andrés guided Esteban through the Department of Marine Geology together with Dr Robert Gatliff, Director of Energy and Marine Geosciences. They all visited the Lilley Centre and witnessed a display of the main BGS activities.

Esteban positively valued the whole experience as a “complete scientific immersion because of my huge professional interest in the field and how closely this is related to the job I do at the Spanish embassy in London, all related to the national plans of infrastructures in the United Kingdom”. The Transport and Infrastructures Attaché was also delighted because of “the huge and positive interest in ‘Ambassadors for Science’ shown by all directors and researchers that I have had the pleasure to meet during this exchange programme.”

Andrés was very thrilled with “the crucial role that science plays in every meeting of a multilateral organisation such as the IMO, such a United Nations institutions that aims for the cooperation between States and the transportation industry to improve maritime safety and prevent marine pollution”. Particularly, Andrés learnt first-hand about “the role of the Group of Experts on the Scientific Aspects of Marine Environmental Protection, GESAMP, a joint advisory mechanism established in 1969 and composed of 16 experts who belong to a wide range of disciplines. GESAMP acts providing independent scientific advice to ONU about the protection of the marine environment.

This experience allowed Andrés to learn about GESAMP and about the study presented by Dr Chris Vivian regarding marine geology and “how to better understand the potential impacts of different geoengineering approaches” and “offer scientific advice to the London Protocol”. (Note: one can find this study and the rest of GESAMP’s reports in this link).

All in all, Andrés found essential “to get involved in science advice groups to ensure a much direct impact of our science. It is key to increase the analytical perception within the decision making process related to spatial planning and investment in infrastructures. This would ensure not only a sustainable and equalitarian economic growth within a national context, but also the reduction of extreme poverty in overpopulated regions such as the Bangladesh Delta within an international context.”

On the other hand, Esteban agreed that “this has been such a quite active exchange of ideas, opinions and technical views about the planning and development of infrastructures”. He thanked Andrés for “such a complete immersion in the work machinery of such a highly specialised research team.”

Both stated that “any professional can become an ‘Ambassador for science’, from teachers to scientists, diplomats, and any citizen.”