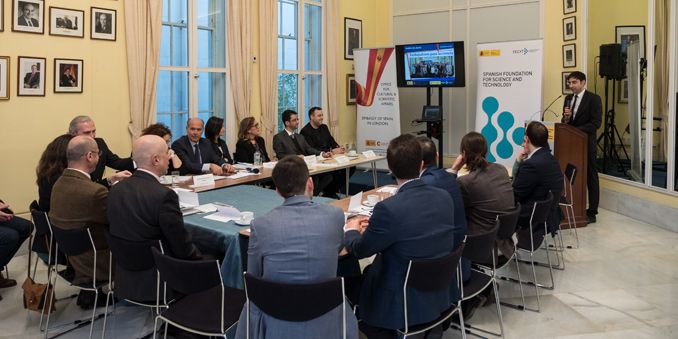 The 2nd edition of “Ambassadors for Science” came to an end last 22nd February in the Spanish Embassy in London. All participant pairs–composed by one scientist and one diplomat or sectorial counselor–shared their own experiences and talked about what they had learnt with this exchange programme.

This last session was introduced by Lorenzo Melchor, FECYT Science coordinator in London. He underlined the principal purpose of ‘Ambassadors for Science’: bringing the public administration and the scientific community closer together for a better mutual understanding, and for science to positively influence public policy.

Jose María Fernández López de Turiso, minister counsellor of the Spanish Embassy in London, recognized his surprise visiting his partner Irene Lázaro del Rey, postdoctoral researcher in the University of Manchester. Irene is a specialist in nanoscience and unfortunately was not able to attend this closing session. Jose María noted the “extraordinary talent and recognition” of Spanish scientists in the United Kingdom.

Miguel Oliveros Torres, Counsellor for Cultural and Scientific Affairs of the Embassy of Spain, described his partner Alfonso Jaramillo, Professor of Synthetic Biology in the University of Warwick, as someone who has “such an enormous scientific vocation and a humanist spirit, which are both traits of the greatest artists”. According to Miguel, Alfonso, who neither could attend the session, praised the work of the embassy and enjoyed learning how bilateral relations between countries are fostered.

Another couple was made up of María Cruz-Guzmán Flores, First Counsellor of the Embassy of Spain, and José Vicente Torres Pérez, postdoctoral researcher in Queen Mary University London. While José Vicente explained that science diplomacy can be an “initial tool for diplomatic relationships”, María underpinned the scientific method as “a useful working tool for diplomats occasionally”.

Likewise, Lorenzo Melchor and Carlos Martínez Pérez, postdoctoral researcher in the MRC Institute of Genetics and Molecular Medicine in the University of Edinburgh, both spoke about their joint experience. Lorenzo noted the “outstanding research development taking place in Scotland” and thanked the high scientific content of the visit. On the other hand, Carlos underlined that “the acquired skills during a PhD can have a clear impact beyond the laboratory”.

José Ramón del Valle Portillo, Commercial Counsellor of the Office for Economic and Trade of the Embassy of Spain, was unequivocal: “This programme has been a very good idea. The first thing I noticed is that university has changed a lot!” After their visit to the new Imperial College campus in White City, he remarked the importance of the “interaction between university and companies”. His scientific partner, Alexandra Esteras Chopo, Corporate Partnerships Associate in Imperial College London, stressed the necessity to promote to an international level the scientific and technological research done in Spain.

Sergio Pérez Pérez, President’s PhD student in Imperial College London, said that the program was “very useful for humanizing diplomats and also seeing how they resolve citizens’ problems”. Sergio’s partner was Juan Duarte Cuadrado, Political Counsellor of the Embassy of Spain. Juan was “astonished” at witnessing the perfect symbiosis and teamworking spirit between engineers, biophysicians and doctors”.

Rosana Gómez Movellán, Counsellor for Agriculture, Fishing, Food and Environment, shared experiences with Javier Galdón Armero, PhD student in the John Innes Centre in Norwich. Both underscored that their exchange experiences were really useful to widen their professional networks and to create new joint ventures.

Esteban Pacha, Transport and Infraestructures Attaché, was paired in these sessions with Andrés Payo García, Lead Scientist in the British Geological Survey. Esteban remarked “the professional usefulness of this pairing” as well as the planning in the country’s infrastructures, the great Spanish presence in research centres, and the value of science diplomacy in a multilateral environment. Indeed, Andrés emphasized his visit to the International Maritime Organization (IMO), and his learning about the existence of scientific advisory boards to this multilateral organisation.

Reyes Zataraín del Valle, Counsellor for Employment and Social Security of the Embassy of Spain wanted to start appealing to widen the ‘Ambassadors for Science’ programme “to the rest of public institutions”. Belén Gómez, Pre-registration Scientist in Great Ormond Street Hospital, praised the “professional service” of the Spanish Office for Employment and Social Security for Spanish citizens living in the UK.

The last pair was composed by Hector Castañeda Callejón, First Secretary of the Embassy of Spain, and Alberto Villanueva Galindo, Associate Lecturer and Researcher in Ravensbourne University London, and Founder and Director of  IDEA Architecture Office. “It was a great pleasure to visit Alberto’s university and get exposed to such a good of amount of Spanish researchers working there. I also had the opportunity to try a 3D print and virtual-reality (VR) goggles”. Alberto Villanueva learnt “how the problems get solved in the embassy”. He added that he got impressed by the existing teamwork.

Ana Elorza, FECYT Science coordinator for the USA, and Fidel López Álvarez, former diplomat and coordinator of the public “Report on Science, Technology, and Innovation Diplomacy” closed the session. Ana spoke about the pilot project of deploying FECYT science coordinators to Spanish embassies in Washington DC, Berlin and London. She also explained the next steps to promote the connection between Science and International Policy. “We must bring science closer to society, and diplomats are essential for this task”.

Fidel López recognized that the biggest challenges of humankind can just be solved with a transnational approach. “Scientific cooperation must be even more powerful. No country can afford doing research by itself”.

This 2nd edition of “Ambassadors for Science” finished with a debate between all participants and speakers. They tried not only to find a solution to the challenge of bringing science closer to society, but also to identify the roles for scientists and diplomats in all of these challenges.

To learn more about all experiences from “Ambassadors for Science”, FECYT will post full reports for each participant pair, including interviews, between March and May 2018.

“Ambassadors for Science” is organised by the Spanish Foundation for Science and Technology (FECYT) and the Office for Cultural and Scientific Affairs of the Spanish Embassy in London, with the support of the Society of Spanish Researchers in the United Kingdom (SRUK/CERU). This programme fits within the FECYT’s priority lines of increasing science outreach and science culture, and supporting the internationalization of Spanish science. The scheme is a pilot experience with the aim of extending it to other diplomatic missions and even to the Congreso de los Diputados and other scientific institutions in Spain.

Scientists belonged to different fields, career stages, institutions and regions from the United Kingdom. They were all selected after an application and review process. On the other hand, participants from the Spanish diplomatic delegation in the UK are diplomats, sectorial counsellors, technical advisors and commercial delegates.

This programme can be followed on Twitter with the hashtag #Amb4Sci.

More information about this scheme can be found on https://www.fecyt.es/en/info/ambassadors-science.