Promotion of the Spanish Biotech industry in London 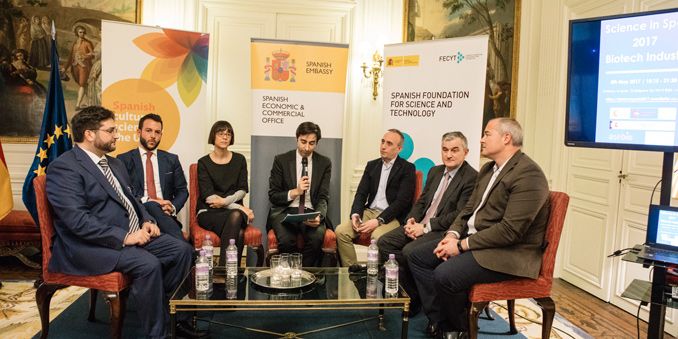 With an audience of 80 people, the Ambassador Carlos Bastarreche opened the seminar highlighting four figures that pointed out the thriving Spanish biotech sector: (1) biotechnology represents the 10.35% Spanish GDP, a figure close to tourism and automotive; (2) Spain has a network of 620 biotech companies and almost 3000 that use biotech in their processes, scientists and research centres of worldwide excellence, 81 public and private universities, 80 technological parks, and a National Health System with over 800 hospitals; (3) biotech exports have increased an annual rate of 7%, more than other products; and (4) some Spanish biotech companies have attracted foreign investment with the support of Spanish risk-capital funds.

Minister counsellor for cultural and scientific affairs Fernando Villalonga moderated the session with all speakers. First, David Fernandez, Manager of International Relationships of the Spanish Biotech Industry Association (ASEBIO) spoke about the current landscape of Biotechnology in Spain. Next, six companies showcased their business and growing plans: Stemtek Therapuetics, with its CEO Ángel García Martín; ilS, by partner Pepi Hurtado; Bifrost Health, by founding partner Aitor Elfau; 3P Biopharmaceuticals, by CEO Dámaso Molero; Ysios Capital, by director Raúl Martín Ruíz; and Bioseed Capital, by CEO and founding partner Juan García. Of note, these companies participated in the event during their visit to the Biotrinity conference.

After their talks, Lorenzo Melchor, FECYT science coordinator in London, chaired the debate “Present and future of the biotech industry in Spain”, which was divided in two parts:

On the one hand, panelists discussed about the main advantages and challenges ahead for the Spanish innovation ecosystem. All speakers agreed that not only the access to scientific talent and state-of-the-art facilities, but also the positive impact of internationalization in the activities of the company, both represented the main advantages of the Spanish system. On the contrary, raising funds in the early stages of business development was the main challenge.

On the other hand, the debate focused on the range of skills required to work in the biotech industry. Panelists all agreed that a scientific background is very important, but transferable skills such as communication skills, project management or international experience, are also crucial. They also stated that the growing interest from scientists in business administration was very positive.

Most of 80 attendees were scientists from academy or industrial sectors, representatives of Spanish companies, investors, delegates from other embassies, and representatives of UK institutions such as UK Trade & Investment. The audience actively participated with questions and comments during the whole seminar.