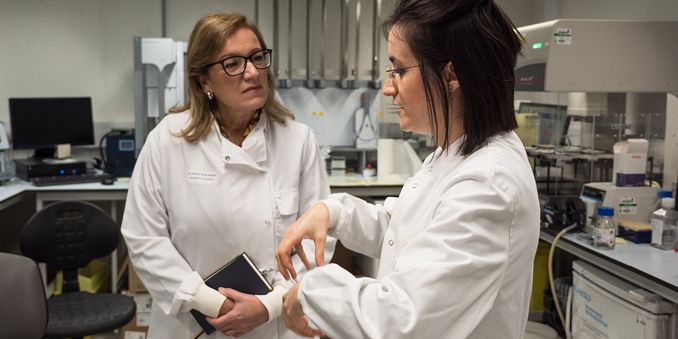 One of these couples was composed by the Counsellor for Employment and Social Affairs of the Spanish Embassy in London Reyes Zataraín del Valle, and clinical scientist from Great Ormond Child Hospital in London Belén Gómez.

Belén visited the Spanish Office for Employment and Social Affairs of the Spanish Embassy in London on the 8th November 2017, where she met with Reyes and her second in command, General Secretary Enrique Sánchez-Izquierdo, in order to learn more about the actions of the office in the fields of employment, of advocacy of the Spanish families’ interests in the UK, and about the wide range of personal queries solved by the office staff. At midday, Reyes brought Belén to the Centro Social de Mayores Miguel de Cervantes, an association of retired Spanish in London that collaborates strongly with the office. In the evening, Belén went with Reyes to the award and scholarship ceremony of the British Spanish Society held in the Residence of the Ambassador.

On 28th November, Reyes visited Belén’s hospital and she went into, in her own words, “the journey of a patient sample from the moment is taken to the genetic diagnostics and treatment recommendation”. Belén showed her around the extraction labs, and the storage facilities, as well as the basics of DNA analysis and a genetic diagnosis report. She made the Counsellor to be entirely conscious of the meticulous scientific process.

Thanks to her visit to the hospital, Reyes noted “not only the most practical aspect of Biology and Medicine present at a hospital, but also the importance of a well-coordinated and multidisciplinary scientific team to ensure a perfect genetic diagnostics in just a few days”. The Counsellor of Employment got well aware of “the importance that charitable funding has in the British society, as a complete specialized surgery floor was fully funded by a private foundation”.

On the other hand, Belén acknowledged “how fully committed all the staff at the Spanish Office for Employment and Social Affairs is, in order to provide support to Spanish citizens living in the UK and solve their queries”. After her visit to the Centro Miguel de Cervantes, Belén learnt “about the lives and stories of people who moved to London more than 50 years ago”.

Both agreed in three areas where a close collaboration could take place between the scientific world and the Spanish Office for Employment and Social Affairs. First, advertising all employment opportunities for scientists in either Spain or the United Kingdom, as well as holding workshops for professional development. In fact, some of these activities have already been carried out by the office. Second, the joint effort that can be done in prevention campaigns for good healthcare, where the office can actually target them to specific groups. And third, teaching sciences at school and fostering scientific and technological vocations in young generations are both important to tackle future societal challenges and the need for a highly-qualified workforce.

While Reyes stated that her experience had been “amazing and highly recommendable for everyone and all kinds of public institutions”, Belén said that she had “greatly enjoyed learning about Reyes’s work, the kind of activity of the embassy, and having met my other colleages in ‘Ambassadors for Science’”.