‘Science in the Classroom’ returns with a game against climate change 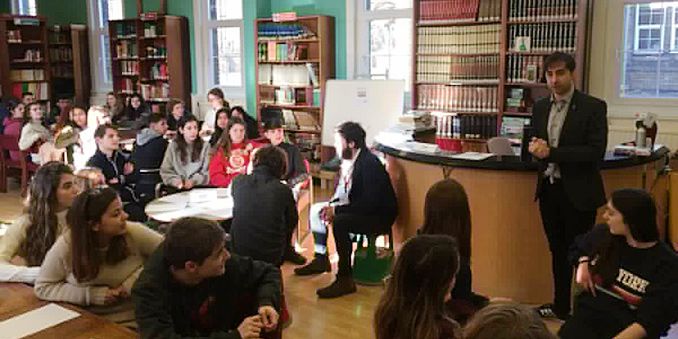 Looking for a strategy against carbon emissions

In “Esofonia”, players are able to roleplay different stakeholders of civil society in order to tackle climate change. The aim is to develop a comprehensive strategy for Esofonia, a town that wants to become neutral in carbon emissions. Students were split in different tables so that each group covered a specific sector: Transportation, Buildings, Energy, Infrastructures…

Characters ranged from a Regular Citizen to an Industry CEO, an Activist, a Journalist, a Scientist, a Mayor’s Assistant, a Local Politician and a Politician from the Opposition. Each character played a role according to their personal views, which were stated in the character’s sheet. Students were thus able to roleplay these characters portraying their different interests and interacting between each other to choose the final approach to accomplish the main aim.

Debates to achieve an eco-friendly town

Juan Carlos Luque, teacher in Economics, attended the session and witnessed how students learned about “the difficulties of negotiations between so various and conflicting group interests”.

In fact, Lorenzo Melchor pointed out that the game harnesses negotiation, empathy and communication skills in students: “This session also aims to encourage students to better work with others. I believe that group dynamics worked really well, and that students were able to discuss their ideas in such enriching debates”.

At the end of the game, all tables discussed about the best approaches to achieve an eco-friendly town. Some ideas spanned from promoting public transportation to introducing more efficient boilers at home, rethink public spaces or establishing an eco-tax to tourism.

Vicente Borredá, teacher in Biology, valued positively the activity: “I liked the game mostly because students were split in groups that had to reach an agreement and consensus to achieve something. This experience fosters initiative and negotiation, which are really needed in this world. Everyone has to put herself in somebody else’s shoes.

Borredá also highlighted that “information” and “awareness” were both key tools to get students involved in the climate change societal challenge. “We need to trigger their critical thinking and social and environmental awareness. It is about putting in place the classical motto ‘in Ecology you have to think globally and act locally’”, he finished.

Lastly, Fernando de la Cruz, Deputy Head Teacher, underlined the benefits of “Science in the Classroom” in his students: “We have received the visit of so many professionals, bringing science closer to our students and encouraging them to achieve their goals, with effort, responsibility and excitement”.

About “Science in the Classroom”

“Science in the Classroom” is a programme organised by the Spanish Foundation for Science and Technology (FECYT) and the Office for Cultural and Scientific Affairs of the Embassy of Spain in London, by which a scientist or an engineer per month visits 14-18 years-old students in the Spanish School Vicente Cañada Blanch in London until the end of the term. This programme began in the year 2015-2016, continued during 2016-2017 and is now back in the year 2017-2018. It is also supported by the Spanish Education Office in the United Kingdom and the Republic of Ireland, the Spanish School Vicente Cañada Blanch, and the Society of Spanish Researchers in the United Kingdom (SRUK/CERU). “Science in the Classroom” is embedded in the FECYT line of action related to the promotion of scientific culture and dissemination, and support for internationalization of Spanish science.

“Esofonia” is a roleplaying game created by Dr Sam Illingworth from Manchester Metropolitan University (UK) and Dr Mathew Stiller-Reeve from The Bjerknes Centre for Climate Research (Norway). The game was part of a session during ESOF 2016 in Manchester. The authors have kindly shared it with FECYT and the Embassy of Spain in the United Kingdom for Spanish translation and adaptation.