Women and Science conference in memory of Margarita Salas in Amsterdam 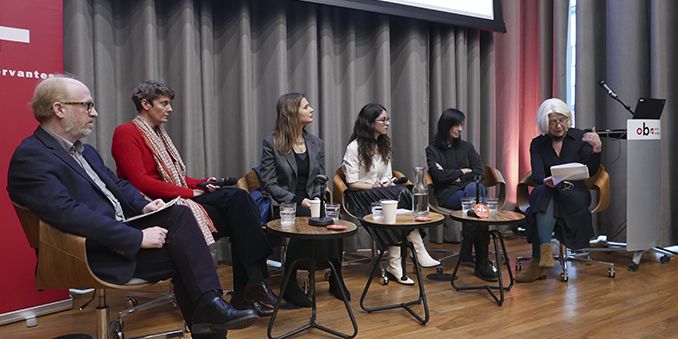 On March 8th, on the occasion of International Women's Day, the Cervantes Institute in Utrecht organized, with the Amsterdam Public Library (OBA), EUNIC Netherlands and the Institut Français des Pays-Bas, a debate program on the challenges of women in science and Spanish as a scientific language.

The Spanish Foundation for Science and Technology (FECYT) collaborated in the development of the program together with the Association of Spanish Scientists in the Netherlands (CENL), the Iberia Club of the European Patent Office, the Czech Center and the Embassy of The Hague Austria.

The event was opened by the Spanish Ambassador to the Netherlands, Ms. María Jesús Alonso, and the head of the House of all Languages department at OBA, Roel van den Sigtenhorst .

In the debate, moderated by the director of the Cervantes Institute in Utrecht, Pilar Tena, participated as speakers the biomedical researcher and CENL president, Noelia Lozano Vidal, the neurobiologist and director of the Barcelona Center for Genomic Regulation, Mara Dierssen, and the astrophysicist and director of the Joint Institute for VLBI ERIC (JIVE), Francisco Colomer, as well as the artists Sonja Baümel and Markéta Baňková.

Lozano and Dierssen opened the debate by showing data on how women scientists still find a glass ceiling in their professional development and presented the possible causes that lead to this situation. Later, Colomer focused his talk on how the use of Spanish in science, in addition to English as a lingua franca, is necessary to support the development of scientific projects and consortia in Latin America. Baümel showed some of his works, in which he explores the human microbiota as part of our human identity, and Baňková read an excerpt from his latest book, in which he approaches natural sciences to children from fiction.

During the act, two videos about Margarita Salas, one of the greatest Spanish scientists of the 20th century, were also shown. In them, Salas talks about his discovery of the DNA polymerase of the bacteriophage virus phi29, which has a crucial application in biotechnology, and has a conversation with María Blasco about the importance of supporting and improving the scientific culture in the education of citizens.

In the second part of the program, the Dutch writer Margot Dijkgraaf presented her new book “Zij namen het woord. Rebelse schrijfsters in de Franse letteren ”(They took the floor. Rebel writers of French literature, Atlas Contact 2020), in which she portrays the French writers who have changed the history of literature.